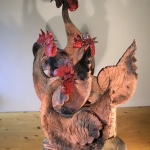 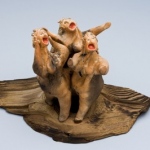 Philip was raised in Ireland, educated in Scotland and is now settled in Canada. He graduated from the Edinburgh College of Art in Architecture and in Town Planning and has since worked in Europe and Canada. He has designed and built many award winning buildings.

He began the adventure in clay some years ago to balance his work as an architect. "I considered that Architecture had become dominated by the limitations of the computer and that clay could loosen up my designs. However, like many working with clay, I found it took on a fascination of its own. Quite soon, I felt as much a potter as an architect."

Good art should reflect the artist.

My present work is something of a reaction to the sophisticated, over-glazed, over-coloured ware that seems to be becoming the norm. I am conscious of the many influences of experience that converge to shape what I make. I like the earth tones and the flame flashes resulting from the primitive method of final firing my pots in a pit using waste wood and sawdust. To further enhance this look, I often introduce foreign objects into the clay before throwing, to encourage imperfections in the final work.