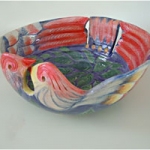 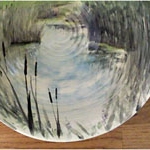 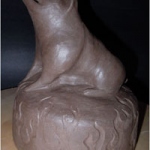 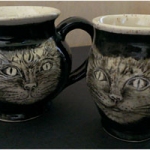 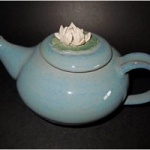 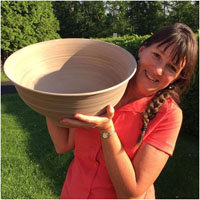 Lara earned a BA in Studio Art from the University of Vermont, where she studied portrait sculpture and oil painting. Twenty years later, she received a BA in Design & Graphic Communications from Lyndon State College.

She has a broad background in the arts including music, dance, performance art, theatre costuming, fine arts, web and print design, and served as Adjunct Professor of Graphic Design.

Following the empty nest of motherhood in 2008, she learned to throw on a wheel with Alison Dodd at the League of NH Craftsmen - Littleton Studio School. Since relocating to Canada in 2010, she has been a part-time Potter and Graphic Designer based in Manotick, ON.

Lara's work may be found at Guild Sales, North Gower/Kars Discovery Tour, or by appointment.

My work is often sculptural, and primarily wheel thrown, manipulated by hand, carved, painted with under glaze, then the stoneware is high fired in oxidation. Alternately realistic or whimsical, my bird themed inspirations come from watching birds as I work out of my temporary summer studio in the garage. Nature themes on my pottery stem from love of the outdoors.

My creative efforts reflect the tension of one of my favourite quotes:

It's art if can't be explained. . . It's design if it doesn't need explanation.
— Wouter Stokkel