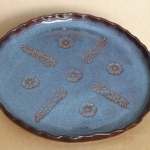 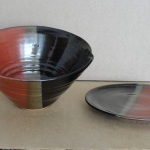 Hazel was born in Saskatchewan and came to Ottawa in 1964; she was employed at NRC in Administration for several years before becoming a wife and mother. In 1982 after a short career as a real estate agent she took some pottery classes at the High School of Commerce, then Algonquin College, and she finally ended up at the Nepean Visual Arts Centre where she has been a studio potter for many years. Hazel has taken many courses and workshops to expand her work into different fields of pottery, like raku, smoke firing, and porcelain jewelry, as demonstrated by her work. She works exclusively in stoneware in the studio functional pieces either on the wheel or by handbuilding.

Once a year she joins a friend at her home in Quebec's Eastern Township where they spend a weekend ‘rakuing'. She spends a month or two every fall making jewelry in her home for the upcoming fall shows. She has been a member of the Ottawa Guild of Potters for about 16 years now and participates in many of their activities including their Fall Sale held at the TD Centre. Pottery has brought Hazel much pleasure, enjoyment and relaxation. Potting at NVAC provides her with comradarie and the added benefit of learning from the technician and other potters in a very well equipped studio