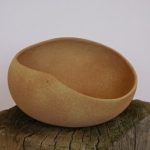 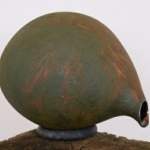 Introduced to the visual arts in high school in England, Janet was immediately at home working in three dimensions.  During the 1960s, she spent two years at Epsom College of Art & Design, and a year in Paris, France, studying pottery, drawing and sculpture in private studios.

Unable to stay away from clay, she made garden pots in her studio in Kent, England and wheel thrown functional ware in St. John’s.  Coiling became her preferred method of pot construction coincidentally with a workshop in Raku firing in the late 1980s. The compatibility of these techniques, combined with her sense of form and surface were the foundations of her work until 2007/8 when she began experiments with dry matt glazes fired in her electric kilns. At present she is refining the use of these organic feeling surfaces and developing greater abstractions of form.

My work explores relationships between volume and movement, balance and tension, interior space with external surfaces.